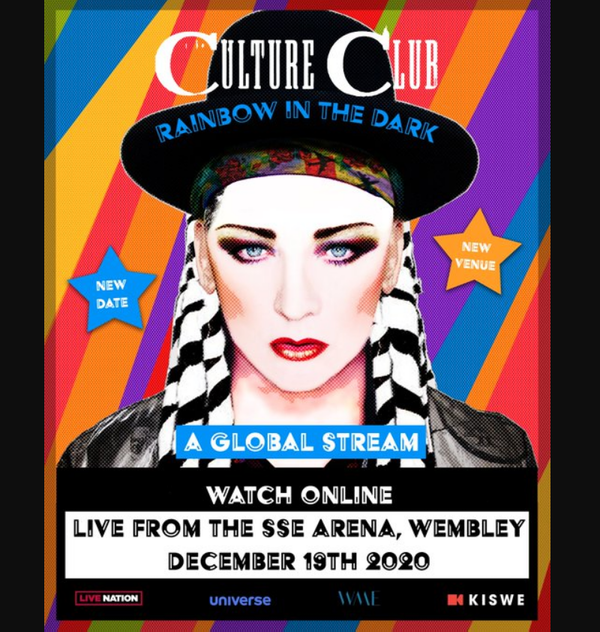 For over an hour yesterday, we forgot there was a pandemic. We were blessed to listen to the melodious sounds of Culture Club, led by Boy George.

The last time I saw Boy George was at the Stony Pony in NJ. The concert was amazing as he and Culture Club were teamed up with the Thompson Twins. What a night that was!

In 1984, Boy George won his first Grammy as Best New Artist. He has won several other grammy's, a Tony for his music and lyrics for the play Taboo (which I LOVED) and MTV awards. He is well on his way acheiving the label of EGOT. (Winner of Emmy, Grammy. Tony, and Oscar). Let's get Boy George a show and a movie!!

There is not a country in the world that doesn’t know the names of Boy George and Culture Club. The Grammy Award winners have sold in excess of 100 million singles and over 50 million albums, making it as one of the biggest pop bands of the 1980s. They achieved seven straight Top 10 hits in the UK, had number 1 singles in over a dozen countries and multi platinum album sales across the world, and were first group since The Beatles to have three Top Ten hits in America from a debut album. They were also the first group in music history to have an album certified diamond in Canada.

Boy George needs little introduction. With a career spanning over 30 years he first shot to international stardom in the 1980s as the front man of one of the UK's biggest exports - Culture Club - and had continued success as a solo artist. He has sold over 150 million records with top 10 hits in every country, including classics such as 'Karma Chameleon' and 'Do You Really Want To Hurt Me'. Boy George is also a hugely respected house DJ and continues to DJ successfully in clubs all over the globe. There are few artists who's careers have spanned so many decades. He has had an amazing career, personal triumphs.

Last night's performance was filled with his famous hits as well as new arrangements. One sound resonated with lyrics, "every breath I take feels like freedom." This song was so beautiful it put tears into all of our eyes.  Boy George stated that he was sent three chords, that drove him to write the entire song. That is raw talent to be able to do that. The new songs that Boy George has written during the pandemic, should win him a new Grammy. The raw talent, the brass and woodwinds and back up vocals that included Adam Lambert....SIMPLY SMASHING last night during this virtual concert!

This virtual experience production was THE best I have seen done by any music group during the pandemic. He gave us over an hour of top notch entertainment that made you feel like you were live in front of him. The way the cameras were positioned at every moment during the performance did that for you. The ocular bobbling one does during a concert was captured in a perfect manner to intensify the experience. BRAVO!  Add another feather to your hat!

We are so grateful for the amazing talent and excellent virtual concert last night by Boy George, Culture Club.  Eventually, as we migrate out of this pandemic in Q3 of 2021, we hope that these virtual experiences never end. The virtual concerts, events, have brought us all such peace and tranquility during a time that significantly lacks that. It has been an amazing part of the pandemic that has helped us heal.